Taking our cue from the bride’s glamorous white and crystal embroidered ballgown, we turned the Four Seasons Hotel Philadelphia into a luxurious summer celebration. The bride’s traditional satin wedding gown was a true ballgown made for a princess! Crystals, pearls and platinum embroidery encircled the bodice of the lavish gown and proved the ideal inspiration for our event design. Although the original plan was to create a formal garden setting for the ceremony outside, in the Courtyard of the hotel next to the magical music of the fountain, Hurricane Irene had other plans for us. Being the detailed and forward thinking design team that we are, it was easy for us to move the wedding ceremony into the hotel’s Grand Ballroom. While the bride and groom had their portrait session throughout Center City, stopping at the Kimmel Center for the Performing Arts and Eastern State Penitentiary, we transformed the hotel ballroom into an intimate ceremony setting. The lovely, softly cascading white bridal bouquet was composed of fragrant flowers such as gardenias, stephanotis, lilies, lisianthus and helleborous. We envisioned a grand, ceremony-in-the-round for the bridal couple. Almost as if they were standing on a wedding cake! With such a beautiful couple, the ceremony stage needed no adornment of flowers. By keeping the stage free of floral designs, it also meant their guests would have a clear view of the couple from all angles. We designed and provided a round platform with a surrounding set of steps. A major benefit to moving the wedding ceremony indoors meant we also had use of the lighting and flowers we planned for the dinner setting. The bride and groom steal one more kiss at the end of the aisle as they depart the ceremony setting. Even the bride enjoyed the ice martini luge the hotel catering department provided for the cocktail reception! The couple collaborated with The Papery of Philadelphia to design an entire invitation suite that included a wedding invitation delivered in a box, black silk and crystal embellishments, rich ecru paper and gold elaborate fonts. A fan-shaped ceremony program was a thoughtful touch for the guests and make sweet keepsakes of the celebration. The ballroom was transformed into a romantic dinner dance with traditional elements such as round tables covered in champagne satin and embroidered lace overlays, silver candelabra with crystal hurricanes, tall glass vases with rounded displays of summer blooms and etched crystal votives. The bride and groom’s sweetheart table was adorned with a lush display of mixed summer flowers and crystal candlesticks. 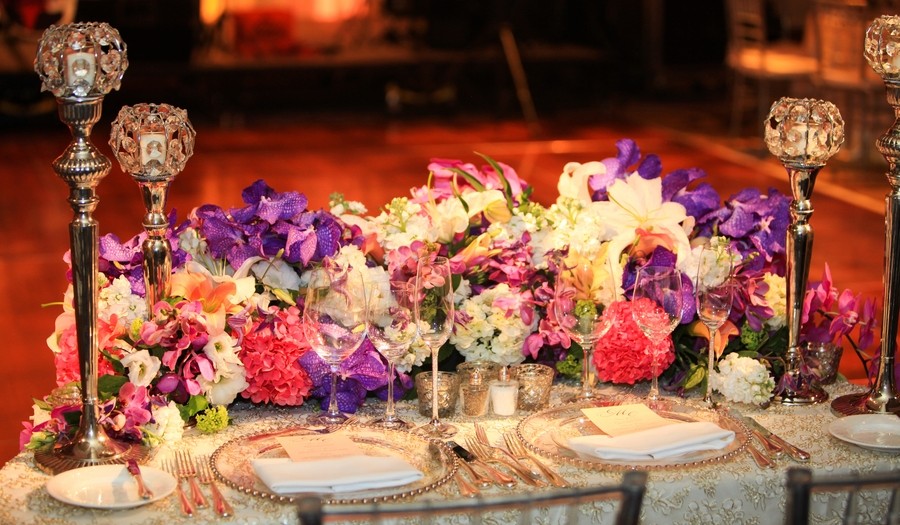 The bride and groom worked closely with CinemaCake to create a sentimental film that would provide a dramatic introduction for them as they entered the ballroom for the reception. The film showed their love story and concluded with them in the actual ballroom of the wedding practicing their dance. The plan was to show the film once guests were seated and then at the precise moment, reveal the bride and groom live on the dance floor, dancing to the same song as in the film (with the orchestra playing behind them). Our event design accounted for placement of two screens which we provided in areas of the room that would allow us to sneak the couple onto the dance floor unseen. The lighting was truly magical for the dramatic reveal of the couple on the center of the dance floor. Our lighting plan meant all the ambient lighting in the room was off for the introduction film, leaving only the soft warmth of candles on the guest tables. Then, at the precise moment we had choreographed, lights came up on the bridal couple quietly dancing on the dance floor. Needless to say, an audible gasp filled the room followed by clapping and cheering! To see it for yourself, check out the film here. Our lighting softly changed  into romantic tones of blue as they continued to dance their first dance. On cue, midway through the song, we softly brought the light up on the orchestra, followed at the end of the song but illuminating the table flowers and then the walls of the room!  Sometimes, creating goosebumps and making beautiful memories is as detailed as scripting a Broadway production. But the special moments didn’t end there. Later in the evening, the creative team from CinemaCake showed a same day edit of the ceremony and celebration. The bride and groom, as well as their guests, couldn’t believe what they were seeing! You can see the wedding film highlights here. A tender moment of the bride and groom as they listen to the best man’s toast. {the bride’s hair looks lovely, doesn’t it?} And, of course, the bride and groom’s lovely cake was decked out with fresh flowers such as hydrangrea and orchids!